There’s a cliche that we all know - dogs are man’s best friend. I think this truth will never change. Dogs being our best friends, almost know everything about us - they understand our tone of voice, our commands, even how we feel and help us cope with the emotional struggle. They know when we’re sad or happy or angry… and they know how to please us and make us feel better.

Now, I think it’s fitting to ask: how much DO YOU know about our dog-counterparts? Here, you will discover 15 interesting facts about your dogs.

15 Dog Facts That Will Surprise You

Researchers believe that our close relationship with dogs started to bloom 12, 000 years ago. Ancient Egyptians had dogs as hunters and companions and they even give their dogs honorable name attributes like: “Brave One”, “Reliable”, “Good Herdsman”, “Antelope” and not so fancy names like “Useless”. 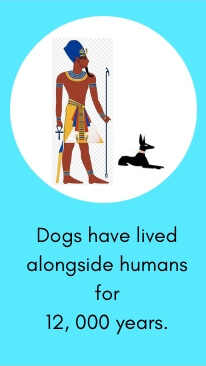 Dog Fact # 2: When Dogs Play with Humans or Other Dogs, Their Brain Releases Oxytocin - The Love Hormone 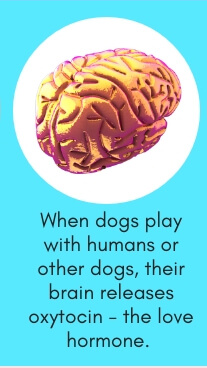 This has been studied by Paul Zak, a professor in California, at Claremont Graduate University - your dog’s brain releases the love hormone, oxytocin while playing with humans and other dogs. This sensation felt by dogs is similar when humans kiss or hug.

It also has something to do with their sense of smell - whenever your dog plays with you or other dogs, your smell ignites the “reward centre” in your dog’s brain. The odour is like perfume to your dog, activating an instinctive emotional response. No wonder why your dog goes crazy when you come home after your long day at work. And they would love you more if they can get healthy and yummy treats from you. 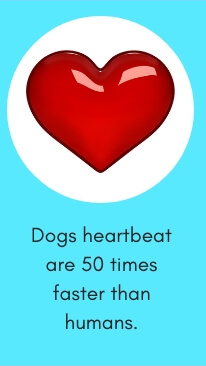 Dog Fact # 4: Dogs Can See in the Dark Because of a Special Membrane Called Tapetum Lucidum. 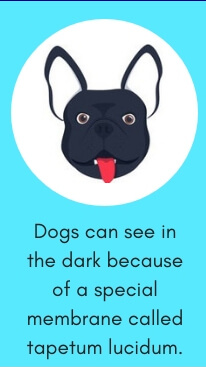 A study, conducted at the University of Wisconsin, proves that dogs can see a lot better than humans at night. This low-light vision of dogs is brought by their large pupils, which let more light in and the center of their retinas contain more cells that are light-sensitive - these cells work best in dim light.

PLUS, your dog’s eyes have this mirror-like structure called the Tapetum - this reflects light as the retina absorbs more light that enters your dog’s eyes. This is also the reason why your dog’s eyes glow in the dark or when you take a picture of your dog with the flash on.

Dog Fact # 5: If the Dog’s Nose is Long, Their Internal Cooling System is More Effective

In case you do not know, dogs have naturally warmer bodies than humans... and your dog’s nose is a body part that lets him/her cool down - dogs tend to wet their noses and the cooling occurs when the moisture evaporates from the nose which has blood vessels that are close to the skin.

This is why dogs with long noses like German Shepherds can cool down a lot better than dogs with shorter noses like Bulldogs and Pugs. 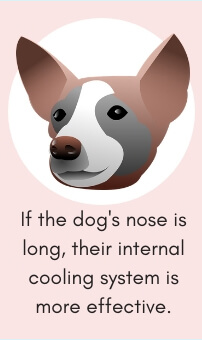 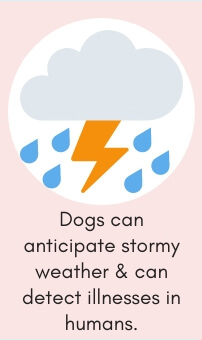 Your dog can smell the rain from a longer distance and diseases - this could be their superpower. Research in Germany, at Schillerhoehe Hospital, proves that dogs have the ability to identify the smell of a span of organic compounds that signal that a human’s body is not working well.

This is why dogs can diagnose cancer - this is currently being further studied by scientists. Your dog can also detect early signs of epileptic seizures and sense if someone has diabetes.

For years, dogs have been regarded as good swimmers but not all dogs can swim. For instance, Basset Hounds cannot swim because of their short legs that are commonly in disproportion, their naturally dense bone structure, and large heads. Other dog breeds that cannot really swim are Pug, Dachshund, Maltese, Bulldog, Chow Chow, Corgi, Boxer, Staffordshire Bull Terrier, and Shih Tzu. 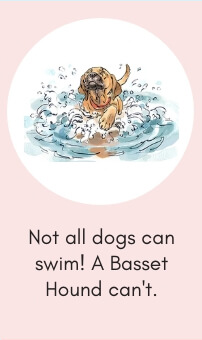 Dog Fact # 8: Dogs Have 3 Eyelids! The Third One Protects the Eye by Keeping it Moist 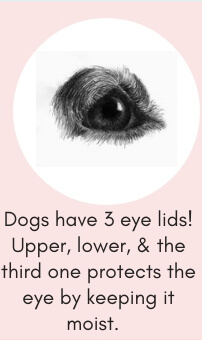 Basically, you will easily see your dog’s upper and lower lids but the third eyelid, also known as the nictitating membrane or haws, is only slightly visible - usually a small pink area in the corner of your dog’s eye. This membrane helps keep your dog’s eye clean through its gland that produces tears for lubrication.

If this eyelid becomes obvious, like popping out - also known as the Cherry Eye, this means that your dog’s eyes are drying out. This is a painful condition for dogs, this usually happens if your dog is battling an infection - bring your dog immediately to the vet.

Australia is one of the well-known countries that generally love pets. For instance, 62% of Aussie households have pets. There are about 24 million pets in the whole country… and dogs are the most common, they are dominating 38% of Australian households - that’s about 4.8 million pet dogs. That’s like 20 dogs for every 100 Aussies. And the government laws are very strict about keeping your dogs and neighbourhood safe, so dog containment is a must. Check our dog-proof dog fence systems here. 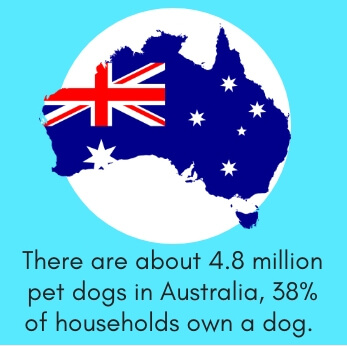 Dog Fact # 10: Dogs Have a Nose Print Which is Equivalent to a Human Fingerprint 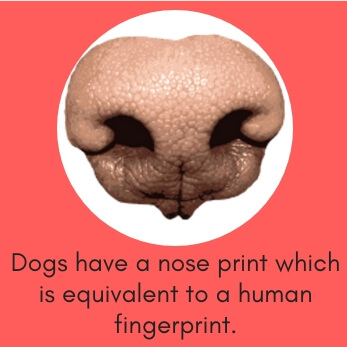 Yep, it’s not their paw print. That’s kinda generic. However, their nose print (as you will now closely look at your dog, I know), is as distinct as your fingerprint. The line and shape combinations in your dogs’ noses can be used to recognize them individually.

I wish we can easily identify our dogs’ nose print though, this comes in handy if you’ve got several dogs in your house and you wanna know who pulled the washer. Hah!

This is why ultrasonic bark collars and devices are effective in eliminating nuisance barking of dogs because dogs have the ability to hear higher frequency sounds like an ultrasonic sound - inaudible to human ears. Just a note, an ultrasonic sound is harmless to your dog’s hearing.

Also, the number of muscles that control your dog’s ear allows your dog to move each ear independently - this is why your dog can captivate you with those cute ear movements. 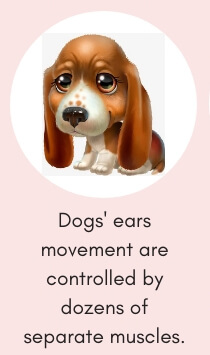 Dog Fact # 12: Because of that Thin Layer of Mucus in Dogs’ Noses, They Absorb Scents Better Than Humans 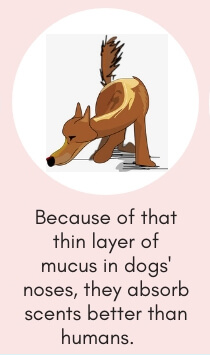 This is why Citronella spray bark collars and dog training collars that emit Citronella are effective. Citronella is a natural oil commonly used as an insect repellant and is a harmless and great deterrent to dogs.

Dog Fact # 13: Dogs Dream; That’s Why They Twitch & Move Their Paws When They Sleep.

Yes, just like the Rapid Eye Movement (REM) of humans, the twitch and paw movements of your dog during sleep indicate that he/she is dreaming. Sometimes, as you notice, your dog tends to bark and act like running - this is because the brain wave patterns of dogs during their sleep are similar to humans. The most interesting fact is that not all dogs dream the same way - smaller dogs tend to dream more often than large dogs. 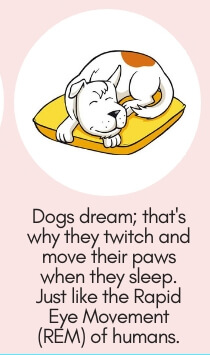 Dog Fact # 14: Dogs Do Sweat But Only Through Their Paws 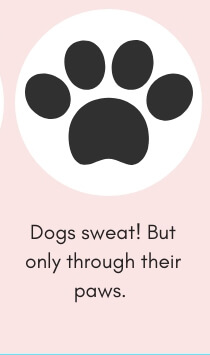 So, it is not true that dogs can never sweat. They do. Their paw pads have sweat glands just like humans. Still, this is not enough to cool them down.

Fact # 15: Dogs Can Count & Can Understand Up to 250 Words & Phrases Just Like a Two-Year-Old Toddler

The American Psychological Association has been presented with research that proves that dogs can be as intelligent as a two-year-old child. Dogs have been proven to count up to 5, understand as much as 250 words and phrases… and even gestures!

In this study, Border Collies have been known to be the most intelligent canines followed by Poodles, German Shepherds, Golden Retrievers, and Dobermans. Yes, most intelligent but also most stubborn breeds. If you find it difficult to train them, you may consider getting help using Remote Dog Training Collars.

Also, dogs have a sense of fairness - most dogs will not execute a certain trick or command and will refuse to play if they do not get the identical reward received by their fellow dogs. Clever, aye?

Did we miss some interesting dog facts that you know?

Here for you and your dog,